Pray The Rosary Here
Pray the Rosary daily with others from around the world.

On the Bead Board... 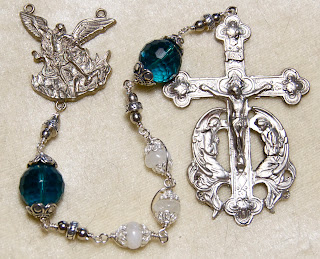 Rainbow Moonstone with some spectacular blue Fluorite in  Sterling Silver!  There are angels surrounding Christ, and another angel--Michael the Archangel--for the center.
The Moonstone is full of flash, both blue and pink; and the Fluorite is clear and striking. And, as usual, the wire wrapping makes this an unbreakable Rosary!
I'll blog again when it's ready to go!
Blessings+
Posted by Neen at 2:11 PM No comments: 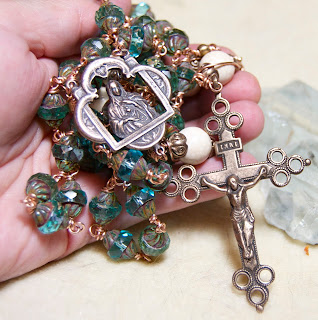 This Rosary looks like it just walked out of a museum--the bronze is lightly antiqued, and the Aves are extraordinary--a chunky band of clean, faceted aqua in the middle with cap-like extensions at either end. The 'caps' are the same blue glass, but have been dipped in a thin, rusty-bronze glaze. This gives them an instant antique look that blends beautifully with the Crucifix and Marian medal. 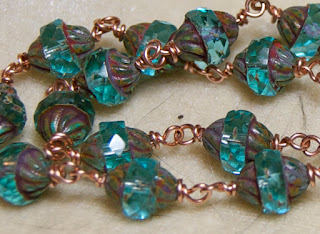 It's in the shop now--click here to visit the listing!
Posted by Neen at 1:43 AM No comments: 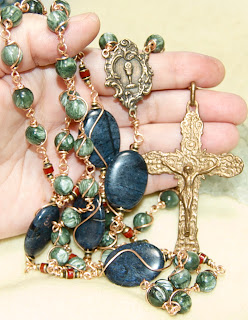 Both these stones are increasingly popular--and with good reason!  The seraphinite, first discovered in Russia in the 1870s, has the same looks-different-from-different-angles glowing sheets of shimmer that you find in moonstone, a close cousin. This chautoyancy makes it a standout among green stones. And the indigo duomortierite contrasts beautifully.
All bronze--all unbreakably wire wrapped with a lifetime guarantee--
Want to see the listing?  Click here!

IN OTHER NEWS
It's meltingly hot here--the tomato plants are happy and so are the kitties (sitting in the windows sniffing the hot summer air); The tomatoes are blossoming and we'll soon have lots of little cherry tomatoes ready for the fur children to batbatbat around the sunroom--a nice change of pace from chasing wayward beads under the bead chest 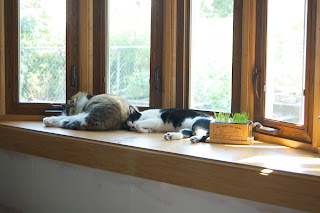 A Renaissance Rosary on the Bead Board!

Coming to HeartFeltRosaries.com--a Renaissance-inspired Rosary with a rich, antique look! 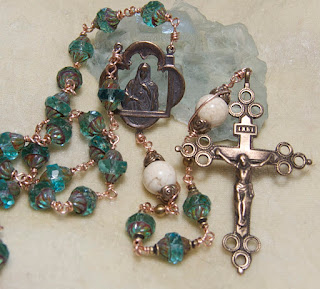 Uniquely shaped Czech glass beads are a luscious, Caribbean blue. Each end is lightly coated in a rich bronze glaze, giving the appearance of an antique, well loved Rosary.  It is especially pretty when the sun hits the faceted centers, making a brilliant sparkle!

It will be listed this weekend, so watch for another blognote to announce it!  In the meantime, stop by the shop (click here) and see what else is available!
Posted by Neen at 1:50 PM No comments:

Angelic Green Seraphinite on the Bead Board!

Coming this week at HeartFeltRosaries.com-- 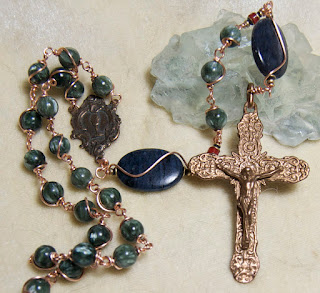 Evergreen-hued Seraphinite is a striking stone which reflects the light differently from different angles, giving it a fluid, shimmering effect called chatoyancy.  Highlighted bands appear and disappear as the stone is turne, and the stone almost glows with light! I added deep blue dumortierite Paters and connect the Aves to the Paters with a hint of deep russet carnelian beads.
I'll blog again when it's listed in a day or two--in the meantime, visit my shop, HeartFelt Rosaries to see the rest of the collection!

IN OTHER NEWS
We had a visitor late last night--I was working on the seraphinite Rosary with the windows open to catch the night breeze. The kittens perched in the window box as is their custom, when suddenly their ears perked up and all attention focused on the window nearest the door. There, in the dark, was a young raccoon sniffing for crumbs where the garbage bag had set earlier that day...cats looked at coon and coon looked back with little interest. He stood up on his hind legs and held out his little paws toward the window, mildly curious to what these three furry creatures on the other side of the screen were...the three cats were transfixed, and nothing moved but their little tails--it was as close as they've ever been to another animal bigger than a mouse--until the young raccoon, having determined there was no food forthcoming, turned gently around and walked around the corner and out of the yard. The kitties watched until the very end of his tail disappeared before slowly moving away themselves--but they stayed near to the window for the rest of the night! How things would have gone if the window had not separated the two species, I'm not sure--but coons are aggressive creatures who look innocent but fight dirty. Glad the kitties were safe!

Blessings+
Posted by Neen at 12:56 PM No comments:

London Blue Topaz Back in the Shop! 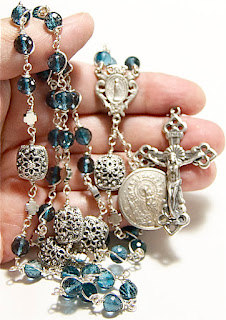 Genuine London blue Topaz in Sterling Silver--an extraordinary, one-of-a-kind Rosary that shows off the intense and striking blue stones to  their best effect! These are gem quality, plump 6mm faceted rounds--hard to find in sufficient quantity for a Rosary, and expensive--but oh so worth the time and investment!

The Paters are special, too--filigree chrysanthemums in solid Sterling, separated from the Aves by simple Sterling Crosses

And all unbreakably double wrapped, then swirled, in low tarnish Argentium 925 Sterling Silver for a Rosary so strong and durable it is guaranteed against breakage for life. Period.

There's a lovely open-work Crucifix, a Miraculous Medal center, and a Mary, Queen of Heaven medal.

And beautifully packaged for presentation, boxed in silver and tucked into a fine organza and velvet beaded bag!

It's in the shop now--Click here to go o the listing!
Posted by Neen at 3:25 PM No comments:

Welcome to my blog! It's all about Wire Wrap Rosaries -- hows and whys and what's new in my collection.
Look for info on new and what's on the beadboard along with my personal views on everything from the quality of my gemstones to new discoveries to the hunt for the perfect Rosary. And, along the way, an introduction to me and my life!

Neen
That's me, sitting in the corner, quietly wrapping beads and contemplating the next one-of-a-kind Rosary. Hospice nurse by profession, bead worker by avocation; raised on a farm, now an urban warrior; lover of animals and owner of the Best Little Kitties and Doggies in the World; inspired by my Creator to make beauty in this world for His Greater Glory and your delight, and to honor the Blessed Virgin and promote her veneration amongst all I meet